Rose Haber, a 35-year old clerk at McNulty’s Drug Store, was robbed and beaten after she exited a bus in front of 5749 Jackson St. in East Liberty as she returned home from work on the night of July 12, 1941.

With the help of bystanders, she made her way to a nearby drugstore where she reportedly talked about her assault and assailant with the police and others.

Transported to Shadyside Hospital, where she was initially thought to be recovering, she died the following afternoon.

Little is known about what Haber was able to report. Surviving police and coroner records do not include a description of her assailant. The first newspaper account of the crime recounts a description of a “white man” wearing “light colored slacks, a white shirt and a sailor straw hat” (Pittsburgh Press, July 14, 1941). Subsequent press reports make no reference to the assailant’s race. 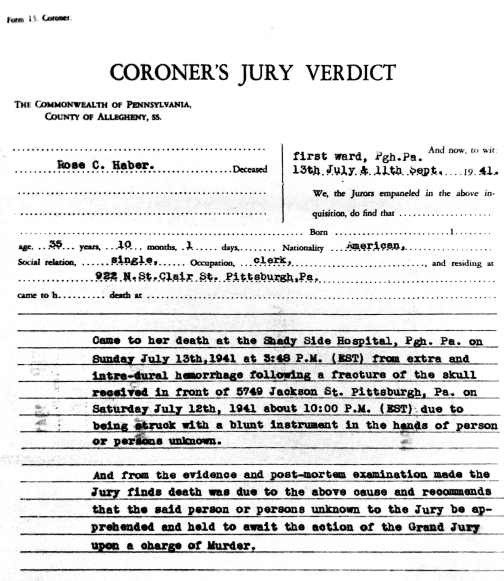 With all the elements of a panic – an unsolved, late night, stranger-based murder of a white woman in a residential area – and other unsolved crimes in the area, police were under intense pressure to make an arrest. All they had to go on were the reports provided by Haber and others at the scene. Most promising was the report of a young woman, Ella Kennedy, who worked as a maid in the home of Herman and Rebecca Fineberg and had witnessed the assault from inside their home next to the bus stop.

In September, police arrested and held Hoy Kenneth Houck,** a white man who became a suspect due to his commission of a similar series of assaults of women in and around Lock Haven, Pennsylvania.

Though some newspaper reports indicated murder charges were filed against Houck, the “natty dresser” was ultimately released after police were unable to overcome his alibi that he was not in Pittsburgh at the time of the killing.

In February, 1942, seven months after the murder, suspicion fell briefly on Raymond Dumont, also white, who had assaulted a woman in McDonald, Pa. Ella Kennedy told police “she was positive” he matched the description of the man she had seen assault Haber (Pittsburgh Press, February 4, 1942). Dumont was also released due to a lack of evidence.

Pressure continued to mount. Then, on March 19, 1942, 20-year old William Kennie Wilson, a homeless, Alabama-born Black migrant who was in custody for assaulting Victoria May on the North Side days earlier, confessed to killing Haber. Lead investigator Albert Jones indicated that police were “baffled” and “puzzled” by Wilson’s confession and reenactment of the crime, which did not match the “known facts” of the case (Pittsburgh Sun-Telegraph, March 19, 1941).

Up to this point, police had not given any indication that Haber’s killer might be Black, despite accounts from witnesses. Neither had the newspapers, which covered the investigation closely and were always ready for the type of incendiary crime story a Black man preying on white women would have provided.

Also troubling was that news reports of May’s assault had described her assailant as a “giant colored man” (Pittsburgh Post-Gazette, March 19, 1942). Wilson’s World War II Draft Registration card, filled out a month before his arrest, listed him as 5’7” and 157lbs. 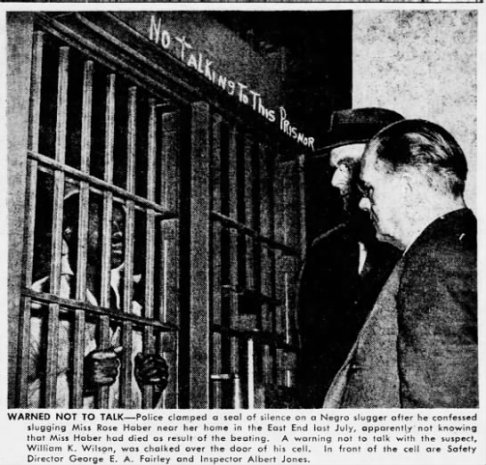 Indicted on April 15, Wilson entered a plea of not guilty on May 4, before withdrawing it and pleading guilty the next day after a church missionary interceded. He also pleaded guilty to other robberies, rapes, and assaults, clearing numerous serious crimes for police.

William Wilson was formally sentenced to death by a three-judge panel on May 14. His defense plea for mercy, during which his attorney, P.J. Clyde Randall, told the court that “this defendant has the mind of a child….I don’t mean he’s insane. This boy doesn’t have the same viewpoint of other youths his age,” was rejected.

Poor, alone, disadvantaged in numerous ways, and without benefit of trial, appeal, clemency review, or competency hearing – a remarkable lack of due process for a death penalty case – William Wilson was executed on August 10, 1942. He was the only Allegheny County resident executed during American involvement in World War II.

Having carefully investigated this case, I believe there is a compelling argument to be made that the State of Pennsylvania executed an innocent man.

* Wilson’s family had moved north from Alabama to the coalfields of Cecil, Washington County, when he was a child. Raised in company housing in the coal town of Lawrence, Wilson moved by himself to Pittsburgh in the late 1930s, where he lived on the streets or in the Catholic Worker-led St. Joseph’s House of Hospitality in the Hill District.

** Houck’s connection to Haber’s murder is intriguing. Beyond his physical similarities to the descriptions provided by Haber and Kennedy, his conviction for a series of remarkably similar crimes occurring at the same time in central Pennsylvania (and his suspected ties to two unsolved murders of women in State College), and his regular work-related travel to Pittsburgh at the time of Haber’s murder, he was arrested for purse snatching in Baltimore after being released from prison in Pennsylvania. He was also arrested for child molestation in Florida in 1961. Houck died in Florida in 1991. 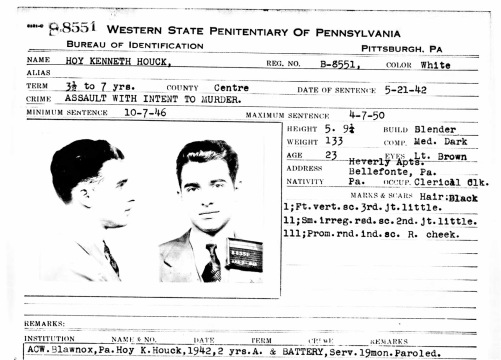 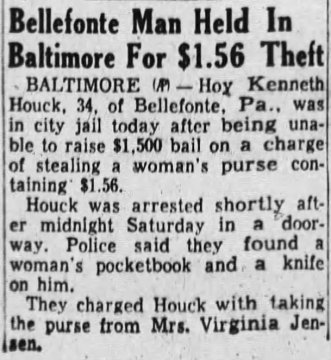