Seeking revenge after having been jailed on Rogers’ complaint, Galligo went to Rogers’ home and stabbed him to death on December 12, 1837. His efforts to kill the woman were unsuccessful. Galligo then turned himself in to the mayor’s office and confessed immediately afterwards. 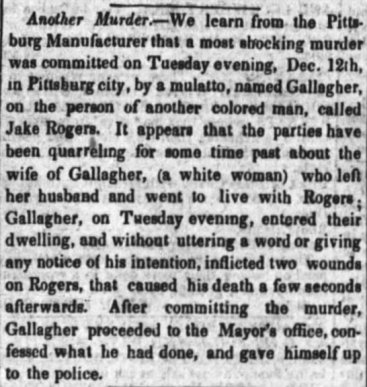 After pleading not guilty, Galligo was convicted of first-degree murder on December 20, 1837, less than three weeks after Rogers’s death.

Galligo’s motion for a new trial was rejected and his death sentence was imposed the following week, on January 8, 1838. A month had not yet passed since Roger’s killing. 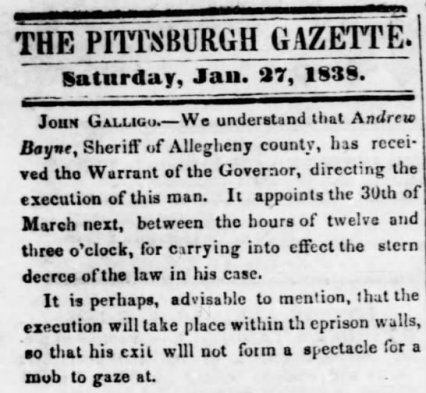 In his pardon request, Galligo’s attorney noted that “a large portion of this community have manifested a considerable degree of sympathy in his behalf, and a decided disinclination to see the unfortunate man made the subject of capital punishment.”

That request was rejected by Governor Joseph Ritner, who was running – unsuccessfully – for reelection. James Galligo was hanged on March 30, 1838, before hundreds of witnesses. 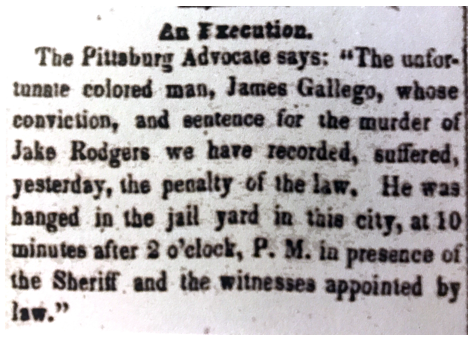 This is all we know of the crime and punishment of James Galligo. Its veracity is impossible to determine. Official records have not survived to document the proceedings and the limited newspaper coverage available was little afforded to a crime involving a Black offender and a Black victim.

On April 10, 1834, Pennsylvania enacted an Act to Abolish Public Executions, becoming the second state to do so (following Rhode Island in 1833). Galligo was thus the first person executed inside the Allegheny County Jail, the first execution in the county in twenty years, and the first execution of a Black defendant.

In the fifty years since Mamachtaga’s execution, a period in which I have been able to identify twenty murder trials in Pittsburgh, seven cases resulted in a first-degree murder conviction and four resulted in executions. Despite a Black population of less than four percent on the city’s population, two Black defendants had been sentenced to death and one was executed.