Christian Jacoby, his wife, Lena, their four children, and a servant, Anna Maria Suttler, arrived in Pittsburgh from Offenbach, Germany, on July 7, 1858. Upon arrival, they checked into the hotel of Daniel Herwig at Penn Avenue and Canal St., downtown, using the name Suttler.

Jacoby had lived in Pittsburgh and worked in a rolling mill for two years prior to his marriage and was returning with his wife and family en route to Chicago to start a life in the United States. 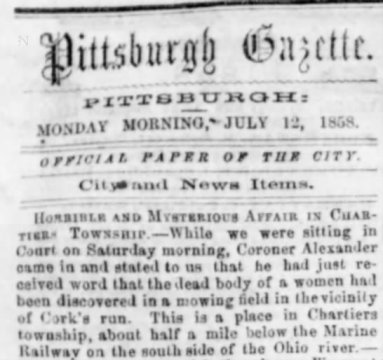 That evening, Christian and Lena Jacoby went on a long walk across the Monongahela River and to the west along the Ohio River to a remote area. There Jacoby shot and killed his wife. It was the first capital case involving a gun murder.

The next morning, with Anna Maria Suttler, who was pregnant, posing as his wife, the Jacobys continued to Chicago.

After Lena Jacoby’s body was found near Cork’s Run on the Ohio River on July 10, an investigation began that ultimately led to her identification and to Christian Jacoby’s arrest in Indiana on August 27. Investigators found that ammunition in his possession matched the gun and ammunition found with Lena Jacoby’s body.

Reports from Germany supported the understanding that was coming into focus; that Lena Jacoby was poorly treated by her husband, that Christian Jacoby was the father of the child Suttler was carrying, and that their illicit relationship was the cause of Lena’s death.

At trial, the state used the gun and ammunition evidence, including a bullet taken from the victim’s disinterred body, as well as his relationship with Suttler, to implicate Jacoby. In his defense, Jacoby claimed his wife committed suicide. Suttler testified in support of that argument, stating that Lena Jacoby had told her that she felt unvalued next to Suttler. After six days of testimony and twenty minutes of deliberations, Jacoby was convicted of first-degree murder on November 20, 1858.

After his motion for a new trial was rejected, Jacoby was sentenced to death on December 11. After his appeal (Commonwealth v. Jacoby, Volume VI, p. 177, 1858) was rejected on January 14, 1859, no recourse remained.

Christian Jacoby was hanged on May 20, 1859, side-by-side with David Evans, who had also murdered his wife.

One thought on “Christian Jacoby”