Edgar Frank Small and Charlotte (Lottie) McAliece were engaged to be married before Small went to prison on a robbery charge. While he was in prison, McAliece met and married iron worker Nicholas Jacoby. Jacoby’s work as a roller in an era of high wage craftsmanship allowed McAliece to move up from her poor upbringing.

When Small was released from prison, he reconnected with McAliece. During a meeting at Gottlieb Keyser’s Saloon, 321 Fifth Avenue, on January 16, 1879, Nicholas Jacoby confronted the pair and asked Small to cease seeing McAliece.

Later that evening, when McAliece and Jacoby were walking home, Small shot Jacoby at close range. He died two days later, on January 18, 1879, after giving police a detailed description of what had happened.

Small was convicted of first-degree murder on April 19, 1879, despite the belief of some that suggestions of McAliece’s promiscuity might mitigate Small’s culpability. Small’s appeal was rejected (Small v. Commonwealth, 91 Pa. 304, 1880) and his pardon request was only acted upon by the Pardon Board after several delays.

Reflective of an era of increasing skepticism about the efficacy and appropriateness of the death penalty, Small was not executed until March 24, 1882. It was the first execution in Allegheny County in more than five years.

The long delay in executing Small and the infrequency of executions led the newspapers to rail against the leniency of the Pardon Board. The Pittsburgh Daily Post said of the Pardon Board, “they have led the criminal element of the community to believe that the death penalty has been abrogated and nullified and that the statutes of Pennsylvania are pliable reeds in their hands to be bent at will.” 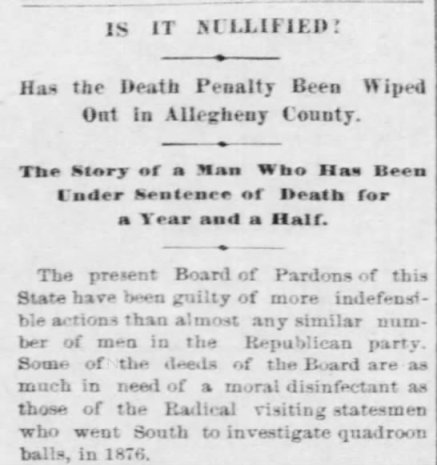 A Pittsburgh Daily Post article on July 15, 1880, struck a similar note. After reciting a long list of recent murders and the less than fatal penalties imposed on the killers, the question was rhetorically posed:

“Is it any wonder that with such a list of deeds of violence, brutal murders, before the people of Allegheny county that they ask the Pardon Board whether any more blood letters are to be set free? Murders will go on and men will go unhung just so long as such blots are allowed on the executive branch of the State Government and crimes which in the days of our grandfathers were looked upon as abhorrent and damnable, will become in the days of their grandchildren, merely gentlemanly pastimes, which add to the credit of him who is the chief actor in them.”

Local juries did not share that sentiment, at least not until the identity of the offender changed with the migration and immigration of African American and Southern and Eastern Europeans in the coming decade. Until then, no executions occurred between 1885 and 1891.

Small was a well-known criminal in Pittsburgh, prominently featured in local crime news while amassing a lengthy criminal record. Among his friends and alleged accomplices in crime was Edward Coffey, who was sentenced to death before committing suicide a few years after Small’s execution.

One thought on “Edgar Frank Small”