Nineteen-year old Gertrude Nichols and her family had recently migrated from North Carolina and she had begun work as a domestic in Bellevue, an early streetcar suburb on the Ohio River northwest of Pittsburgh.

Angelo Jackson, an older South Carolina-born man who migrated to Pittsburgh after his wife died, worked as a gardener and handyman in nearby Sewickley.

After spending time together at Nichols’ Maple Avenue home on October 24, 1905, the couple quarreled over mutual jealousies. Those quarrels escalated, fueled by alcohol, and Jackson shot Nichols on the sidewalk in front of her home.

Jackson fled, and was arrested later that evening; he confessed to police. Nichols survived long enough to identify Jackson as her shooter to friends.

At trial, Jackson pleaded not guilty. Facing multiple eyewitnesses and his earlier confession, Jackson’s defense emphasized that he had experienced a head injury due to a fall on the ice in 1903 and had been acting in an unusual manner since then. He was convicted of first-degree murder on February 7, 1906. The jury deliberated two days before reaching its verdict. Jackson was sentenced to death on December 22, 1906.

After a vigorous commutation effort by his attorney, Jackson’s death sentence was commuted to life imprisonment on July 17, 1907, on the basis of evidence of insanity. His previous head injury and its role in his unstable behavior figured prominently in the Pardon Board’s recommendation.

Jackson was transferred to Western Penitentiary. 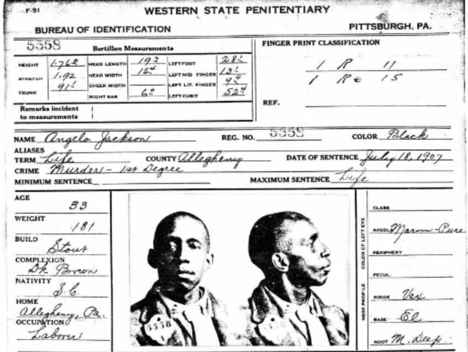 By the 1920s, Jackson was making annual requests for a full pardon. Those efforts were finally successful on November 3, 1927. In its recommendation, the Pardon Board offered a new narrative of the case, in which Nichols had a “bad reputation,” was drunk, and had threatened to kill Jackson. After she motioned as though to pull a weapon on him, the Board continued, Jackson fired defensively and inadvertently killed Nichols.

Jackson’s pardon was aided by the intercession of famed novelist, Mary Roberts Rinehart and her husband, Dr. S. M. Rinehart, for whom Jackson had worked as a gardener more than two decades earlier. Testifying before the Pardon Board, Dr. Rinehart offered a racist and paternalistic defense of Jackson.

Rinehart, who wrote murder fiction, was opposed to the death penalty.

Representing Jackson in his clemency and pardon requests was attorney Michael A. Musmanno, who had represented Sacco and Vanzetti in the highest profile capital case of the era, and who argued Jackson acted in self-defense against a jealous Nichols. Musmanno wrote about the case in his 1958 memoir, Verdict!

Released from Western Penitentiary, Angelo Jackson returned to South Carolina. He died there on March 25, 1931.