On Sunday afternoon, June 15, 1902, a group of black coal miners from the Bishop Mine at Borland Station, near Bridgeville, were drinking beer on their day off. A fight broke out and Russian-born John Markoff, who apparently owned the shanty where the miners drank, was shot three times. Left paralyzed, he died on July 1, 1902. Four men, including “Buck” Saunders, were arrested. 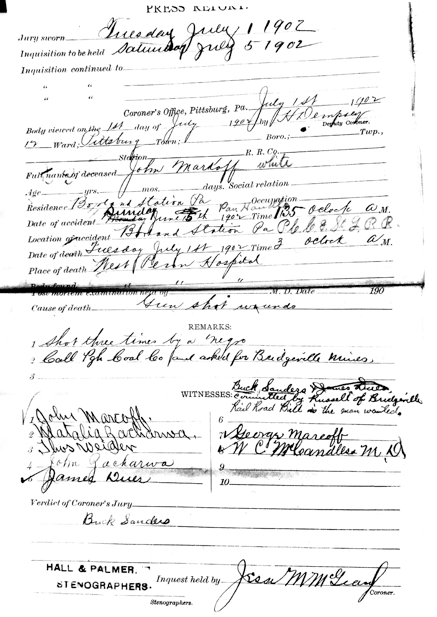 Witness and newspaper reports of the killing varied. Some indicated the miners robbed and killed Markoff. Others told of a fight was among the miners that Markoff intervened in and was shot. Others suggested a more racial dynamic, with an argument between the black miners and Markoff and his white friends.

Represented by William H. Stanton, a Black court-appointed attorney, Saunders was convicted of first-degree murder on October 14, 1902. His defense was that in the midst of the melee, someone else fired the fatal shot. William Bowden, the only other miner charged in the case, was acquitted.

With lingering doubts about what happened and Saunders’ consistent denials of having fired the fatal shots, his death sentence was commuted to life imprisonment on December 11, 1903. He was transferred to Western Penitentiary to serve out his sentence.

George “Buck” Saunders died at Mayview State Hospital, very near the site of Markoff’s killing, in 1925.