During the fight, Cardamone’s friend, Sam Parri was shot and killed by Vesh before Cardamone killed Vesh. All of the men were Italian immigrant steelworkers.

After being arrested, Cardamone claimed Vesh killed Parri and that he acted in self-defense.

Charged with both murders, Cardamone, a laborer at Carnegie Steel, was convicted of first-degree murder for Vesh’s killing on March 9, 1917, after multiple witnesses to the late afternoon gun battle testified. He was acquitted of Parri’s murder.

Cardamone was sentenced to death on February 27, 1918.

His co-conspirators, Bruno Cuda, Frank Cero, and Raffali Pena, were tried for their roles in the incident. Cero and Peni were convicted of second-degree murder and sentenced to seven to ten years in prison. Cuda was acquitted.

Cardamone’s case for commutation was heard by the Board of Pardons on June 21, 1918. On the basis of statements from trial judge A.B. Read, an attorney for Vesh’s family, and the Assistant District Attorney who tried the case that Cardomone’s punishment should not exceed that of his co-conspirators, commutation of his sentence to life imprisonment was recommended. He was transferred to Western Penitentiary to serve that sentence. 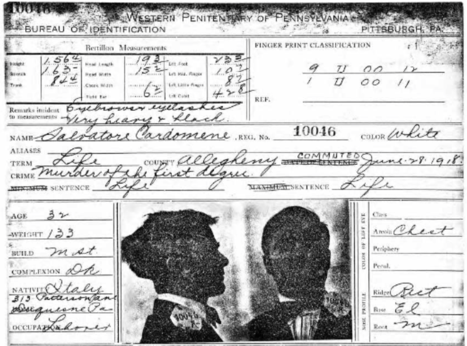 After two unsuccessful pardon requests, Cardamone was pardoned on July 5, 1929, and released from prison after more than twelve years behind bars. He returned to work in the steel mill.