In “one of the most unusual” (Pittsburgh Daily Post, March 4, 1924) murder cases in Allegheny County history, Warren Scott killed his wife, Frances King Scott, by severing an artery near her vagina with the claw end of a hammer in their Franklin Way, Hill District home on September 18, 1923.

The couple, who had come to Pittsburgh from Virginia, had been quarreling when Frances Scott threatened to call the police. Warren Scott responded by beating her, knocking her unconscious, and disemboweling her. She bled to death. He then barricaded himself in the house. Police forced entry and arrested him.

Scott was convicted of first-degree murder on March 5, 1924, after his defense of intoxication was rejected. On May 28, 1924, he was sentenced to die in the electric chair.

Despite the unusual circumstances of the crime, the marginal statuses of the defendant and victim limited the newspaper coverage to mostly single paragraph articles. There is little information available to provide a fuller picture of the lives of the Scotts, their relationship, or Frances Scott’s death. 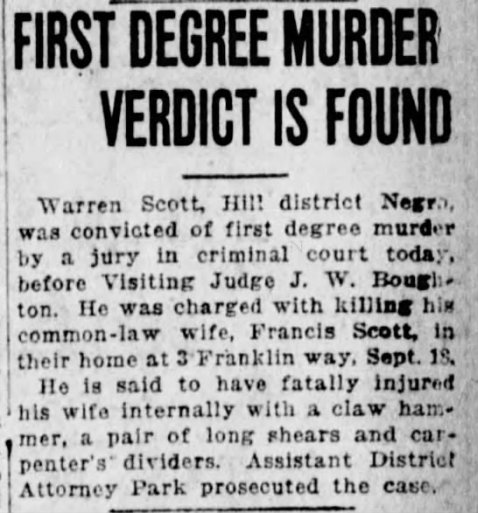 Warren Scott’s death sentence was respited several times while his case was being appealed. On December 5, 1924, the Pennsylvania Supreme Court reversed Scott’s conviction and granted him a new trial (Commonwealth v. Scott, 281 Pa. 548, 1924). In its decision, quoted below, the court noted that, though the evidence was sufficient to support Scott’s guilt, it was not sufficient to support a finding of first-degree murder.

The Commonwealth charged and presented evidence to prove that death was caused by laceration of the outer lips of deceased’s vagina, produced by the insertion, “not more than a quarter of an inch,” into that part of her body, of the claw-end of a metal hammer, of the type commonly used in opening crates, thus severing an artery. There was no evidence to show the exact circumstances under which this cruel and unnatural act was perpetrated; but, by such a deed, defendant evidently intended to do great bodily harm to his victim, and this, with the attending circumstances, established malice. It was error, however, for the court below to treat the weapon used as prima facie a deadly one and to charge: “He who takes the life of another with a deadly weapon, and with a manifest design thus to use it upon him, with sufficient time to deliberate and fully to form the conscious purpose of killing, and without any sufficient reason or cause of extenuation, is guilty of murder of the first degree.” The circumstances under which employed, the manner of using, and the place on which a weapon, not ordinarily a deadly one, is used may be enough to justify a jury in finding that the weapon was deadly in character; but in the above instruction the trial judge assumed that fact.

Summarizing, the court ruled that it was wrong for the state to assume as a matter of fact that the hammer was a deadly weapon used in a manner reasonably intended to produce death.

Notwithstanding the inappropriateness of the death penalty, the Court’s decision is another – with the McMullen, McGowan, Hillman, Exler, Scherer, and Diano cases – in a long list in which judicial or executive authorities  granted tremendous legal deference to men who killed women (see the discussion here).

At retrial on February 9, 1925, Scott pleaded guilty to murder. The judge then set the degree of murder at second degree. Scott was sentenced to nine to eighteen years in Western Penitentiary.