In a series of daring and deadly crimes, Paul Jaworski and his “Flathead Gang” dominated the headlines and the courtrooms of Pittsburgh and the surrounding region in the 1920s.

After a number of smaller robberies, Jaworski’s intense, almost suicidal spree began when he and his gang shot and killed payroll clerk John Ross Dennis while robbing him of the $23,000 payroll of the Pittsburgh Coal Company in Beadling on December 23, 1922.[i]

Three years later, the gang pulled the same heist, this time killing Isiah L. Gump, a payroll clerk at Terminal Coal Company, during a robbery at their Mollenauer mine on Christmas Eve 1925. More than $48,000 was stolen before Jaworski fled in a Lincoln touring car.

Able to avoid apprehension again, Jaworski returned to the headlines when he led the gang as they committed the first-ever armored car robbery using a landmine in Bethel Township, south of Pittsburgh, on March 11, 1927. They made off with the $104,000 payroll that was on its way to Coverdale, Pennsylvania for the Pittsburgh Terminal Coal Company. No one was killed.

Alerted by a suspicious neighbor, police arrested Jawarski the next day at the Washington County farm of Joe Woscoski. At the time of his arrest, he told police guns and ammunition were buried on the farm and confessed to killing Gump.

Three months later, on August 18, 1927, Jaworski and fellow murderer John Vasbinder escaped from the Allegheny County Jail. The escape occurred when Jaworski’s brother, Sam, smuggled guns into the jail. As he exited the visiting room, Sam Jaworski pulled out three guns, giving one each to Vasbinder and Jaworski, who then shot their way out of the jail. Two guards were wounded.

Jaworski remained on the lam for over a year before being arrested in Cleveland on September 14, 1928, after a robbery and shoot out with Cleveland police in which Officer Anthony Wieczorek was killed and Officer George E. Effinger was injured. Jaworski was shot in the head by police, but survived.

At the time of his arrest, Jaworski and his gang were planning to storm the Allegheny County Jail to liberate his brother, Sam.

Jaworski was indicted for murder in Ohio the day after killing Wieczorek, raising the possibility he would not be extradited to Pittsburgh to complete his sentence. That his death was reported to be imminent due to injuries sustained in the gunfight with police further complicated his legal status.

Ohio authorities agreed on October 19, 1928, to extradite Jaworski. The appeal of his death sentence, which was pending at the time of his escape, was rejected on October 22, 1928.

His efforts to win a stay of execution on insanity grounds unsuccessful, Paul Jaworski was executed on January 21, 1929. While awaiting execution, Jaworski claimed to have killed twenty-six people, including four police officers. 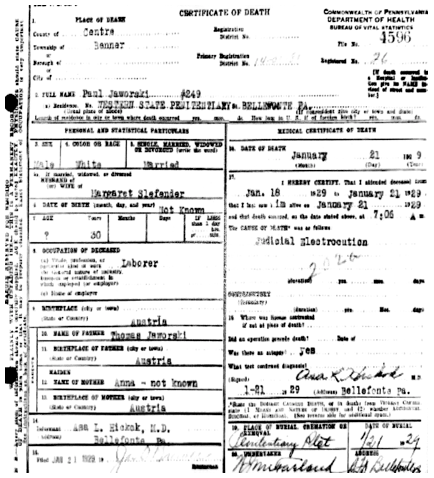 Long after Jaworski’s execution and the end of the gangster era he was so much a part of, his cousin, Thomas, sought to emulate his criminal exploits. That plot was foiled and Thomas Jaworski was sentenced to eight to sixteen years in Western Penitentiary.

[i] Daniel Rastelli, a coalminer from Avella, was arrested, convicted of first-degree murder, and nearly sentenced to death in this case. Questions about his guilt led to a new trial, and Rastelli was acquitted on December 8, 1924. Jaworski subsequently took full responsibility for the killing and fully exonerated Rastelli.