Named as though its future of hardship, violence, and obsolescence was foreseen, the mining town of Calamity was formed by Walton & Company in the coal region south of Pittsburgh in the late nineteenth century.

The French immigrant miners who settled there were led by August Breyesse. Though the murder in which he was involved would come to be attributed to the labor unrest and anarchist violence of those turbulent times, the more prosaic reality, difficult as it is to disentangle from the conflicting accounts provided in multiple languages, is of infidelity and jealousy.

Breyesse, an intimidating figure, was involved in an affair. When Sofia Raes spread reports of the affair, she and Breyesse’s par amour quarreled. Those quarrels escalated to include Raes’ husband, August, at which point Breyesse and Noel Maison, a coal miner and friend of Breyesse, confronted the Raes outside their home on September 24, 1893.

During that confrontation, Breyesse directed Maison to shoot the couple. Maison did so, using Breyesse’s gun, killing Sofia Raes and injuring her husband. Maison and Breyesse were arrested soon after the shooting.

Their trials were conducted through the use of interpreters, which created confusion. Among the confusing issues were the names of the parties, leading to some reports in which the names of Maison and Breyesse were reversed.

After Maison’s conviction and sentence were affirmed, a well-organized and far reaching clemency campaign was mounted. Testimonials on his behalf were received from jurors who convicted him (who characterized Maison as “only the poor ignorant tool of his partner”); his neighbors in Calamity; from Bloye, the small French village in which he was raised; as well as from the French Embassy. He was characterized as well-liked, though naïve and a “tool and dupe” of Breyesse. 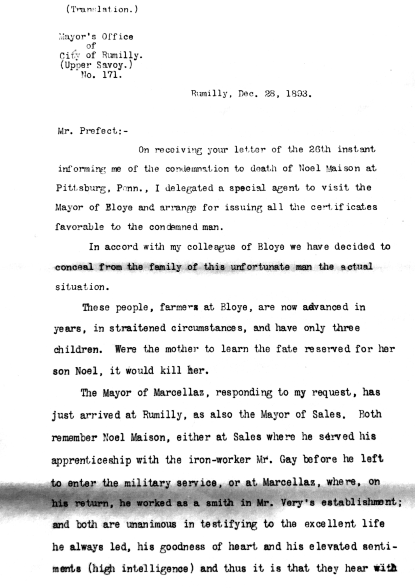 Ultimately, those efforts failed, and Noel Maison was hanged on September 6, 1894. He is buried in St. Mary’s Cemetery.

Breyesse entered Western Penitentiary on November 4, 1893. He remained there at least through 1901, when his pardon request was denied.

Another murder among French miners in Calamity had occurred the previous year. Redares was acquitted at trial two months later.