In an all too familiar set of circumstances, Albert Dabrydino, a Polish immigrant steelworker, killed Mary Mucynska, a Polish immigrant domestic he was dating, at her 150 Pius St., South Side residence during the afternoon of May 28, 1903. Mucynska was shot once in the chest. Dabrydino then slashed his own throat in a failed suicide attempt.

Dabrydino and Mucynska planned to marry in Poland but, Dabrydino reported, were unable to because he could not prove to the priest that he had not already married after having first immigrated to Pittsburgh several years earlier. 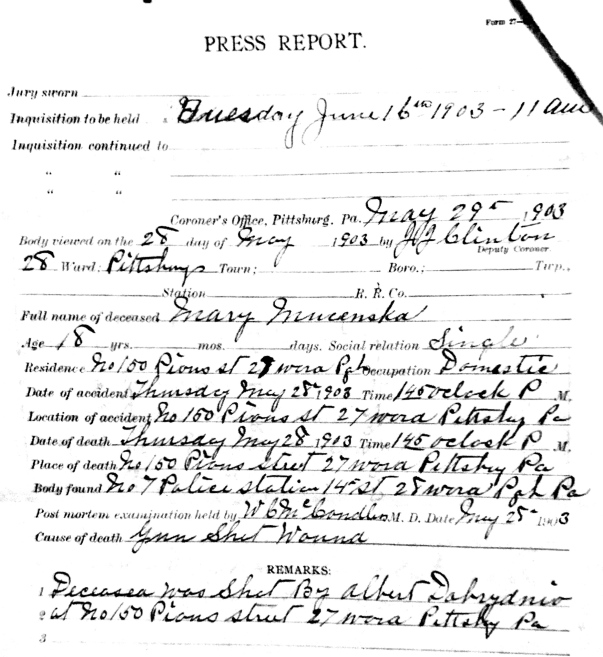 The couple arrived in the United States only a week before the murder and were staying in a boarding house. After preparing for the wedding, Mucynska told  Dabrydino she did not want to marry him. Reports varied as to the reason for her change of heart. Some said she had fallen in love with his brother; others indicated she did not think he had enough money.

Dabrydino was mobbed and beaten by neighbors after the killing.

With limited resources for his defense and strong inculpatory evidence, Dabrydino was convicted of first-degree murder on December 15, 1903, after a one day trial and twenty minutes of jury deliberations. The jury rejected his claim that Mucynska was killed when she interfered in Dabrydino’s attempt to kill himself.

His motion for a new trial refused, Dabrydino was sentenced to death on February 23, 1904.

After delaying Dabrydiono’s execution to allow his pardon request to be considered, Governor Pennypacker set the execution for October 27, 1904. Albert Dabrydino hanged as scheduled. He was buried at St. Adalbert’s Catholic Church on the South Side.

It was the seventh and last execution of the year, more than had ever been carried out in Pittsburgh. That same number was achieved only one other year: 1920.

The view from Pius St.

One thought on “Albert Dabrydino”