Charles Davis killed his wife, Birdie, in her sister’s 30th St. home on Saturday evening, December 21, 1901. She was shot several times in the chest.

The Davises had fought frequently throughout their relationship, allowing Davis to become “known to police as a brutal character” (Pittsburgh Weekly Gazette, June 27, 1902). Those fights escalated to include death threats, leading Birdie Davis to separate from Charles eighteen months prior to her murder and move in with her sister. 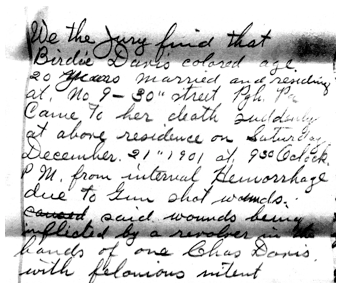 After another death threat, she filed charges and a warrant was issued for Davis’s arrest. He disappeared, only to reappear the day of her killing. When Davis encountered Birdie on the street that day, he beat her badly, leaving her seriously injured. Later that evening, he went to Birdie’s sister’s home, forced himself past the family members trying to protect her, terrorized her further, before shooting her at close range and killing her. Davis fled; he was arrested the next day.

At trial, Davis, an unemployed iron worker, claimed he was under the influence of drugs and alcohol, and that his frequent drinking had earned him the nickname “Kid Booze Holster.” 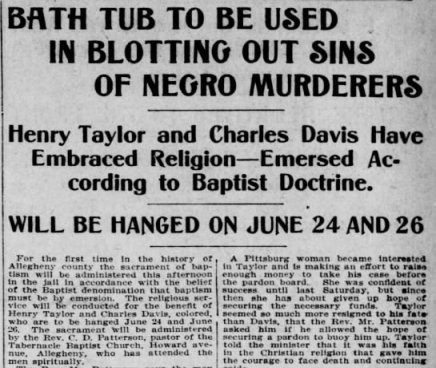 Without the resources or support to pursue an appeal or clemency, Charles Davis was hanged on June 26, 1902, barely six months after killing his wife and two days after Henry Taylor was hanged.