August Layton’s body was found in a field on the Taylor farm in East McKeesport on June 17, 1901. Missing for weeks and presumed dead, he had been shot five times. 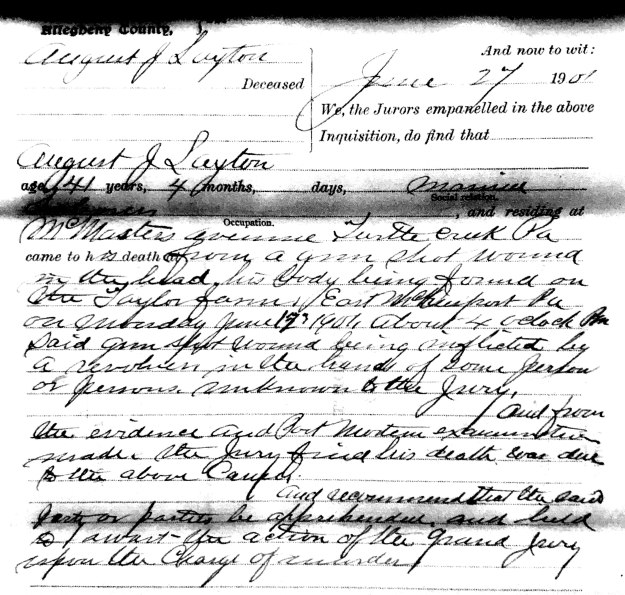 So began one of the more remarkable and labyrinthine capital cases in Pittsburgh history.

Initial suspicion focused on robbery or a work-related motive. Further investigation, however, led police to believe Layton’s wife, Nellie (nee Hilson), was involved in his death.

On that basis, police arrested 25-year old John Davidson McWilliams, who was involved in a relationship with Nellie Layton, but did not have the evidence to hold him.

The case languished until February 1902, when Cleveland police received a tip from a woman named Gertie Culp that William Byers had confided in her about the killing. Cleveland police contacted Pittsburgh police, who did not follow up until April 1902. When they did, they found the story to be quite credible, and arrested Byers, McWilliams, and McWilliams’ new wife, Nellie, the former Mrs Layton, on April 14, 1902.

The story that emerged was that Byers, who was 18, had became infatuated with Mrs. Layton while boarding in the Layton home. Taking advantage of his naivete, Nellie Layton suggested to Byers that he kill her husband while allowing Byers to believe that doing so would allow them to be together. Byers did as she suggested, giving Mrs. Layton the opportunity to pursue her relationship with Mr. McWilliams.

Spurned by Layton after the murder, Byers moved to Cleveland and started a relationship with Culp.

At trial, Byers was convicted on his own confession on February 5, 1903. In the confession he implicated Nellie Layton McWilliams and John McWilliams, who had married in December 1901.

In the trial of the McWilliams the following month, the state portrayed Nellie as the mastermind of the crime. In a widely criticized verdict, both Nellie, who was pregnant, and John McWilliams were acquitted on March 13, 1903. Their trial had been delayed until after McWilliams gave birth. Claiming that Byers had acted alone and that the state had failed to implicate the former Mrs. Layton, they had offered no defense. 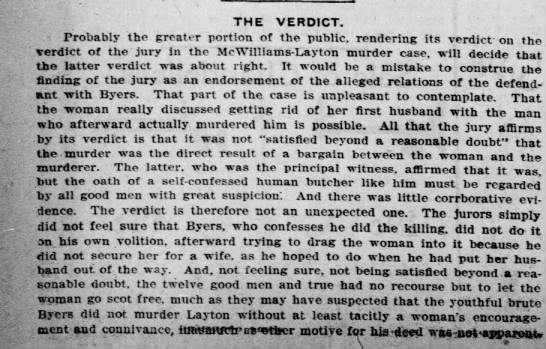 Nellie and John McWilliams divorced less than two months later. By that time, John McWilliams had relocated to Carnegie, married Sadie Stroup, taken a job in the railroad industry, and started a family. Their marriage license, dated February 1903, was issued before McWilliams’ trial and before John and Nellie’s divorce. It falsely claimed McWilliams had not previously been married.

John McWilliams died in Carnegie in 1937.

William Byers was sentenced to death on October 23, 1903.

In a highly unusual set of circumstances, Byers was executed on March 23, 1905, despite a Board of Pardons recommendation of commutation to life imprisonment.

His hanging was badly botched. When the trap was sprung the loop of the noose pulled away and he fell to the ground. Byers staggered about under the scaffold until the Sheriff removed the black cap and returned him to the jail. The rope was again adjusted and, pale and trembling, Byers was again placed on the scaffold and the trap sprung. This time there was no mishap and death resulted.

Reno Dardaia had been hanged without incident just prior to Byers’ execution.

The failure to accept the Board of Pardons’ commutation recommendation, which apparently stemmed from Governor Pennypacker’s belief that the acquittals of the McWilliams indicated that Byers had testified untruthfully, was particularly remarkable considering Byers’ role as a cooperating witness against the McWilliams.

Indeed, the District Attorney at the time of Byers’ conviction, John C. Haymaker, said at the time of Byers’ execution: “There was never another instance in this country like it. No man, as far as I can discover in looking over the records, was ever hanged after turning State’s evidence.”

One thought on “William John Byers”