Edward Brown delivered coal for Alma Maude Malin, a retail coal dealer in Versailles, an industrial town on a bend in the Youghiogheny River just upstream from McKeesport. When Brown used the company coal wagon to haul some personal belongings, Malin deducted the cost of that trip from his wages.

On the morning of July 16, 1918, as the decisive Second Battle of the Marne began in Europe, Brown went to Malin’s Chestnut St. home to dispute the matter.

An argument ensued, and Brown killed Malin with blows from the butt end of a rifle. Brown had been working for Malin for only two weeks. Brown fled after the killing and was apprehended that evening on a Lake Erie train at Jacobs Creek, near Connellsville. 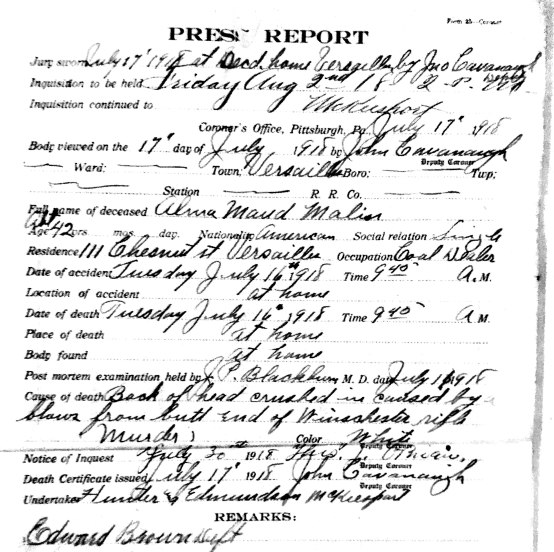 Likely influenced by the incendiary racial and gender dynamics of the crime, the murder of a white woman by a Black man, while Brown was still on the loose the Harrisburg Telegraph described him as a “a giant negro….nearly seven feet tall and …between 225 and 230 pounds.”

Once arrested, Brown shrunk back to human size. The Pittsburgh Press described him as six feet tall and 225 to 230 pounds.*

In custody, Brown “was put through a preliminary ‘third degree’” and confessed to police.

At trial, the Virginia-born Brown denied any involvement in the killing, claiming he was on a hunting trip that day. He was convicted of first-degree murder on May 28, 1919. After his motion for a new trial was rejected, he was sentenced to death on June 30, 1919.

His pardon request denied, Brown was executed on June 1, 1920. In addition to Benny Rowland and William Russell, Brown was one of three Black defendants from Allegheny County executed that day.

These were the last of seven executions in 1920, tying the record set in 1904. Six of the seven men who were executed were Black.

* The records of the Allegheny County workhouse, where Brown served a one-year felony assault and battery sentence in 1910, list Brown as 5’11” and 185lbs.

** In keeping with the intense racism of the era, note that Brown is referred to more often as “the Negro” than by his own name.