Bernard S. McAneny and his wife, Margaret (Igims), adopted an abandoned child in 1917. That generous act apparently introduced tremendous tension into their marriage. Believing that his wife was showing undue attention to their child, Mary Elizabeth, Bernard quarreled frequently with Margaret.

On December 5, 1920, the argument became so heated that Margaret called the police to their McKeesport home. That incident led the couple to separate. Three times over the subsequent week, McAneny came to his wife’s new Spring St. home to reconcile and each time he issued threats and pulled his gun when his wife refused to return home.

Then, on December 11, 1920, McAneny, 36, a member of the infamous Coal and Iron Police who worked at the massive Clairton steel plant, went to the nearby home in which Margaret, 30, and Mary Elizabeth were living and shot and killed them both.

McAneny was arrested later that day in Clairton and confessed to the murders. 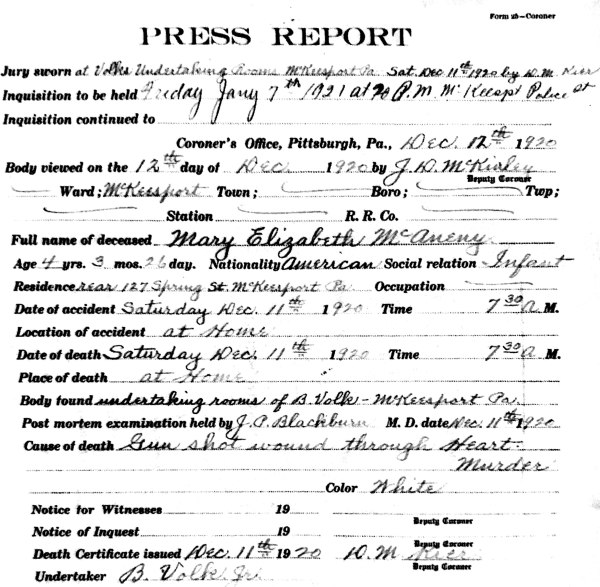 With McAneny’s confession and the eyewitness testimony of Rose Hamburger, in whose home the victims were living when they were killed, McAneny was found guilty of first-degree murder on June 21, 1921. His trial had lasted only several hours. He was sentenced to death the same day. 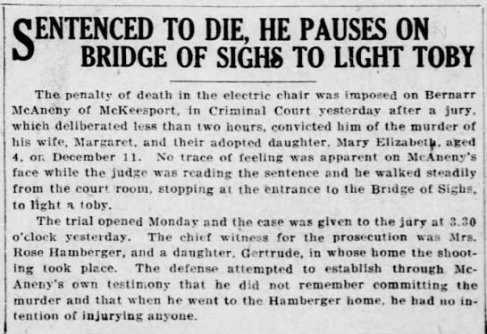 Margaret Igims McAneny was born in Spokane, Washington in 1889 (according to her death certificate; newspaper accounts of her death list her as 29 years old, suggesting a birth year on 1890 or 1891; her marriage license – a less authoritative source, particularly given her youth – indicates she was born in 1884). In 1904, at age 14, she served time in the Allegheny County Workhouse for prostitution. She married McAneny the following year.