George H. Prescott and his wife were close friends of Charles F. and Fern F. Thase, who lived nearby on the North Side. Beneath the seeming contentment of their friendship, George Prescott and Fern Thase carried on a long-term clandestine relationship. Prescott, who sold pianos, used periodic visits to the Thase residence to collect their piano payment as cover for their intimacy.

When Prescott became concerned that Thase was becoming too friendly with other men, he confronted her in her 306 Jackson St. (now Jacksonia St.) home on the morning of April 8, 1924. Their quarrel escalated, and Prescott slashed Thase with a razor and, failing to kill her, shot her. He then left the Thase home. 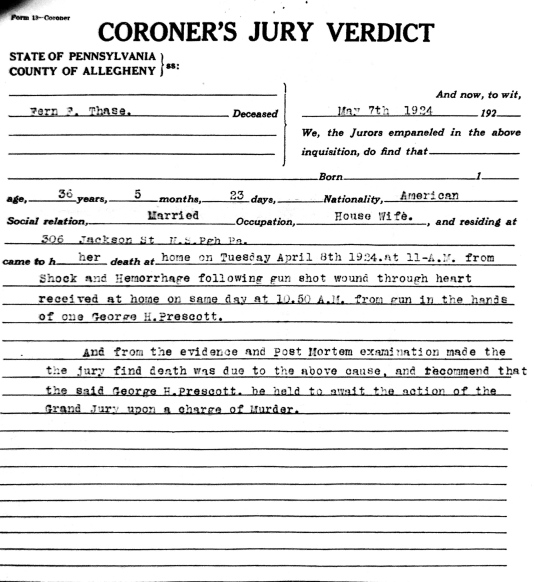 After being identified by Thase’s neighbors, Prescott was arrested at home that afternoon. As he was being led into the police station, he attempted suicide by slashing his own throat. It was initially believed his wounds were fatal.

As Prescott recovered, he confessed to police that he killed Thase because she was ending their relationship. Prescott later repudiated his confession.

At trial, Prescott claimed that he was too drunk at the time of the killing to know what he was doing. He was convicted of first-degree murder on October 16, 1924. His jury was among the first in a capital case to include a woman.

After his petition for a new trial was rejected, Prescott was sentenced to death on May 28, 1925.

His aggressive pursuit of an appeal (Commonwealth v. Prescott, 284 Pa. 255, 1925) and commutation unsuccessful, Prescott vowed that he would not be executed. In keeping with this vow, he stashed a razor blade in his cheek and slit his throat and wrists on February 20, 1926, two days prior to being transported to the electric chair for his scheduled execution.

He recovered in Mercy Hospital and was executed a month later, on March 29, 1926.