Eight-year old Alexander Sabo and his six-year old sister, Helen, were reported missing in the mining hamlet of Mollenauer, near Castle Shannon, on May 27, 1925. The two youngest children of poor, Hungarian-immigrant parents, Charles and Rosa (Rose) Sabo, were found beaten to death in the woods near their home the next day. They had been sexually assaulted before being killed. 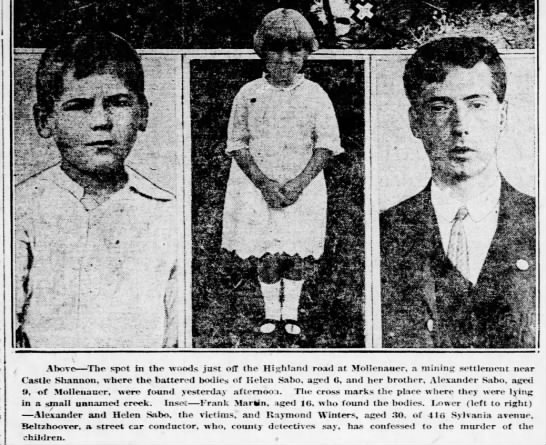 Winter, a World War I Army combat veteran who had been gassed and shelled, quickly confessed to police that he lured the children into the woods with a bag of candy. He had unsuccessfully tried to solicit two older Sabo children for sodomy prior to enticing their younger siblings.

Though the case had the elements that made it particularly tragic and sensational, as a legal matter it was quite straightforward. Winter’s defense, that he had found and moved the dead bodies of the children while strolling through the woods, but was otherwise uninvolved in their deaths, was weak.

The only legal question of any doubt was whether Winter, who had no prior record, was mentally ill or cognitively impaired, whether by his traumatic war experiences or for other reasons.

In a case that generated enormous public interest, Raymond Winter was convicted of first-degree murder on March 26, 1926, and sentenced to death. His was the first Allegheny County case in which a jury that had the choice of life or death for a first-degree murder conviction chose death. Only four of the fifteen Allegheny County executions conducted under that rule were of white defendants.

With the assistance of his wife and parents, Winter aggressively and unsuccessfully pursued appeals (Commonwealth v. Winter, 289 Pa. 284, 1927) and clemency. In each case, his mental health claims were considered and rejected.

Raymond Winter was executed on January 9, 1928.

Charles Sabo died in November 1980. Rose Sabo died in April 1942. They are buried together in Springdale Cemetery.

John McNeil, who was the warden of the Allegheny County Jail at the time, later said Winter should not have been executed because he was clearly mentally ill and that his execution troubled him more than any other with which he was involved.