As he walked home from the late shift at Peters Packing Co., a McKeesport meat packing plant, on May 31, 1940, 60-year old plant foreman Frank Akerson was robbed by Willie Jones. Akerson reportedly yelled when approached by Jones, who then shot him. Akerson died the next morning. 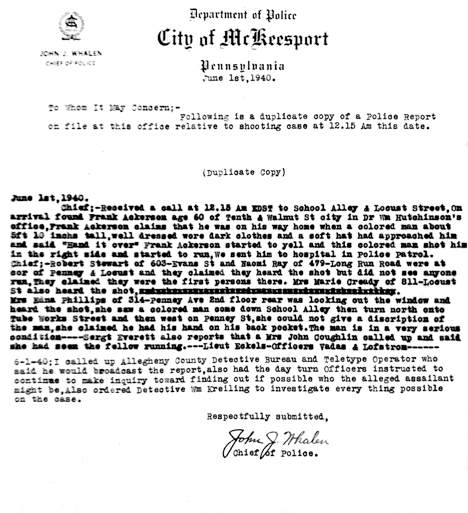 Akerson provided a description of his assailant before he died. Jones, who was born in Georgia and lived in McKeesport, was also identified by Edna Phillips, who saw him from inside her home as he fled the scene.

After arresting Jones on June 3 on an unrelated disorderly conduct charge, police discovered stolen items in his possession. After ten days of aggressive questioning, Jones ultimately confessed to killing Akerson. He later claimed that he was beaten into confessing and denied any involvement in Akerson’s killing.

On the strength of eyewitness testimony, his own confession, and the gun used in the murder, Jones was convicted of first-degree murder on October 24, 1940, and sentenced to death. Despite evidence of a racially biased investigation and trial before an all-white jury, proceedings Jones characterized as “poor man’s justice,” his motion for a new trial was rejected and conviction was affirmed on appeal (Commonwealth v. Jones, 341 Pa. 541, 1941).

With the support of the American League to Abolish Capital Punishment and other civic and religious groups and the close attention of the Pittsburgh Courier, the execution of Willie Jones was stayed multiple times while a pardon could be considered. After the Pardon Board found Jones’s case unpersuasive, a mental competency exam was ordered.

After he was found to be competent, Willie Jones was executed on November 24, 1941.

Despite his execution, Jones’s case marked the beginning of a new era in the death penalty in which cases involving Black defendants would be vigorously contested in court and would receive the attention of national civil rights and abolitionist organizations.