Shellie McKeithen lived in Aliquippa before moving to Cleveland. With Clinton Harrill, McKeithen returned to the Pittsburgh area on March 24, 1944, to rob Tucker Watkin Boxley, whom he knew to be involved in loan sharking and believed would have large amounts of cash in his Bellevue home.

On March 25, the two men robbed Boxley, 68, of $146 and some other items and beat him to death with a hammer. Unable to find any more cash, they set Boxley’s home on fire and fled.

McKeithen confessed and implicated and testified against Harrill. In a trial that was delayed when the judge ruled that the prosecutor was intoxicated and insulting, Harrill was convicted of voluntary manslaughter on December 1, 1944. He was sentenced to six to twelve years in Western Penitentiary.

McKeithen was convicted of first-degree murder on January 10, 1945. After his motion for a new trial was rejected on April 18, he was sentenced to death. His was only the second and the last death sentenced imposed in the county during World War II.

On appeal, McKeithen argued that he committed the same crime as Harrill and should have been charged similarly. The Court ruled against him (Commonwealth v. McKeithen, 353 Pa. 85, 1945), finding that the much younger Harrill was a secondary party, acting under McKeithen’s guidance. His clemency request was likewise rejected. 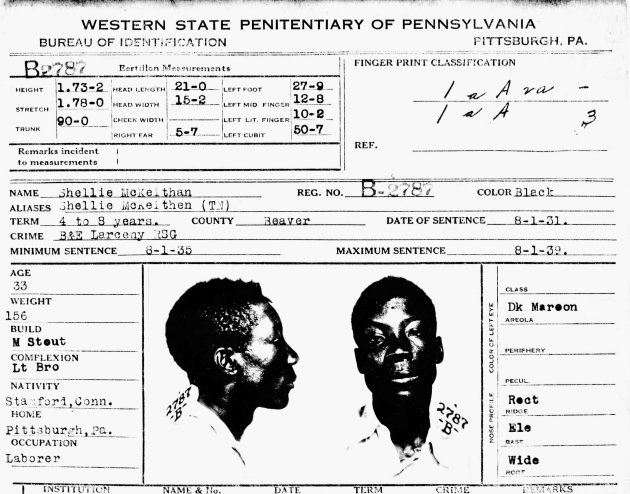 Shellie McKeithen, who had a lengthy criminal record made up primarily of property crimes, was executed on January 7, 1946. His was the 99th execution in Allegheny County and the first involving a felony murder in which a Black defendant killed a Black victim.