Ambrose Lynch was a deputy sheriff in Allegheny City, where he lived with his sister, Mary E. Teets, and her husband, Samuel, at 190 Arch St.

Coming home from work after midnight on June 12, 1872, Lynch, nicknamed “Bruiser,” found his sister in bed with William Hatfield, a married father of six and also a police officer. Enraged, Lynch entered her room and stabbed Hatfield, who stumbled out of the house and collapsed on the pavement in front of the North Avenue M.E. Church. He died later in the morning of June 12. Both men were Civil War veterans.

Lynch, who had a prior record for disorderly conduct, immediately confessed and claimed he acted properly in the face of the adultery he witnessed.

His sister, whose husband was out of town on an extended business trip at the time of the killing, denied an extramarital relationship with Hatfield, saying instead that they were long time friends and were only talking.

At trial, Lynch claimed temporary insanity.  Confronted by his own confession and the testimony of multiple eyewitnesses, he was convicted of first-degree murder on July 10, 1872. After his motion for a new trial was refused, he was sentenced to death on January 18, 1873.

After a determined clemency effort supported by a number of prominent Pittsburgh attorneys, clergy, newspaper editors, and business leaders, the patriarchal logic that underlay Lynch’s actions and his defense were ultimately accepted by the State Board of Pardons. His sentence was commuted to life imprisonment on August 7, 1875. Central to that effort was the argument that the evidence of his sister’s adultery created such strong feelings in Lynch that “the elements of premeditation and deliberation were almost wanting” (from a letter to the Board of Pardons).

Another letter to the Board of Pardons in support of clemency, stating that Lynch’s “sudden and uncontrollable anger…under such suspicious circumstances” represented “the best feelings of the human heart,” well captured the patriarchal logic justifying Lynch’s actions. 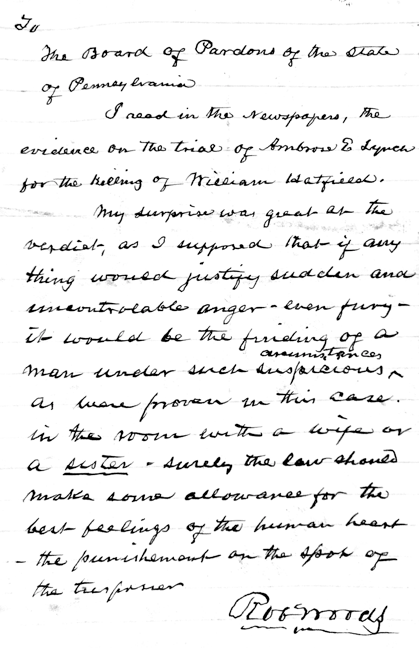 Lynch was transferred to Western Penitentiary. His legal efforts to contest his conviction continued until he was fully pardoned and released from prison a decade later, on December 23, 1885. He died of tuberculosis on June 27, 1888. 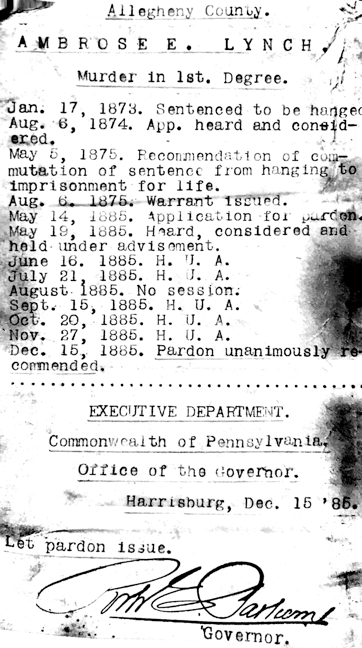 In the years before and after the Civil War, Lynch was an early baseball pioneer and a star catcher with the Allegheny club.

Samuel and Mary Teets remained married throughout their lives. He died in Philadelphia in 1902. She died there in 1904.