John Abernathy killed William C. Leslie during an argument in Henry Kreiger’s Diamond St. (now Forbes Avenue) saloon on the evening of December 5, 1881. Both men, who were acquaintances, were intoxicated.

Their friendly conversation escalated into a discussion of who was tougher, which led to a fight, which led to threats, which, after Abernathy left the bar to obtain a gun, led to a shooting. After the shooting, Abernathy went to the bar next door. He was arrested there. 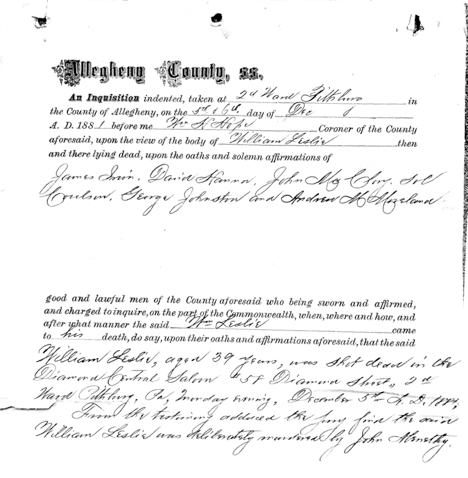 Newspaper reports portrayed each man favorably, finding little of concern in the violence between them or in the violence in their backgrounds. Abernathy, nicknamed “Bloody,” was twenty-two years old and unemployed, with a prior conviction for disturbing the peace and reportedly unable to hold a steady job due to unreliability and troublemaking.

Leslie, a 39-year old Civil War veteran of the 6th West Virginia Cavalry, millworker, and volunteer firefighter, was known for his physical aggressiveness.

Curiously, the Allegheny City-born Abernathy was related to another Allegheny City killer whose case followed a similar path. Abernathy’s mother, Catherine Teets, was the sister-in-law of Ambrose Lynch.

At trial, Abernathy argued self-defense and an absence of premeditation. Due to the circumstances of the murder – the role of alcohol, the spontaneity of the violence, the instigation by Leslie – it was widely expected that the well-connected Abernathy would be found guilty of second-degree murder.

Instead, he was found guilty of first-degree murder on December 30, 1881. In an era in which most murders involved white native-born or Western European-immigrant men, death sentences were few and executions were fewer.

After his motion for a new trial was rejected, Abernathy was sentenced to death on March 4, 1882.

Concluding that the trial court had prejudiced the jury by admitting Abernathy’s history of reform school without explaining that history as the result of paternal abandonment and by excluding evidence of Leslie’s “quarrelsome disposition,” the Pennsylvania Supreme Court reversed Abernathy’s conviction and granted a new trial on November 20, 1882 (Abernethy v. Commonwealth, 101 Pa. 322, 1882).

After entering a guilty plea, Abernathy was found guilty of second-degree murder and sentenced to 12 years in prison on April 17, 1883.

John Abernathy died of typhoid in Pittsburgh on April 27, 1906. His cause of death is notable in that Pittsburgh had the highest typhoid mortality in the United States in the years just before and after the turn of the 20th century.

As explained by the Pittsburgh Survey in 1909, “[b]etween public indifference, private selfishness, and political inertia, the germ has pretty well had its own way with Pittsburgh, and the city’s annual waste of life from absolutely preventable disease has been a thing to make humanity shudder, had it been expressed in the lurid terms of battle, holocaust, or flood, instead of in the dumbly accepted figures of tuberculosis, typhoid, and infant mortality.”

These problems were well-explored by the Pittsburgh Survey, a pathbreaking compilation of social scientific reports on social conditions in Pittsburgh. More contemporarily, Carnegie Mellon University Historian Joel Tarr has done remarkable work on environmental conditions in industrial Pittsburgh. Central to his work is an emphasis on the dominance of private interests and the underdevelopment of the public sphere and public good in that era.