Henry Schafer’s badly beaten body was found in a ravine along Kitanning Road in West Deer Township on Friday, October 13, 1876. Evidence indicated that Schafer, a cow trader who lived in Deutschtown, Allegheny City, was killed at that location the previous day.

He and his business partner, Henry Linkner, had been driving cattle home from Saxonsburg, Butler County. The men, fellow German immigrants, lived together in Schafer’s house with Schafer’s wife and two children.

Witnesses reported seeing a man matching Linkner’s description with Schafer’s horse, buggy, and clothes on October 13. Schaffer had also been carrying at least $100 in cash.

The circumstances of the crime created confusion. Linkner had a reputation for being soft spoken, polite, well-liked, and pious. It was Schafer who was viewed as  quarrelsome.

Linkner was arrested at the cow market on October 14, covered with blood and in possession of Schafer’s watch and $100.

He protested his innocence throughout the case, first claiming Schafer was killed by Negroes and later that he was killed by some of his many enemies. The newspapers were sympathetic, suggesting that somehow Schafer may have provoked the killing or otherwise acted to mitigate Linkner’s responsibility.

The jury viewed the case otherwise, convicting Linkner of first-degree murder on December 29, 1876. He was sentenced to death on January 13, 1877.

Linkner did not appeal his conviction. However, he filed a remarkable clemency request containing page after page of signatures, more than a thousand all told. Letters of support were also provided by the District Attorney, the editor of the Pittsburgh Post, and other community leaders. Their arguments for clemency centered on Linkner’s advanced age, the weakness of the case against him, and the appropriateness of a lesser conviction and sentence. 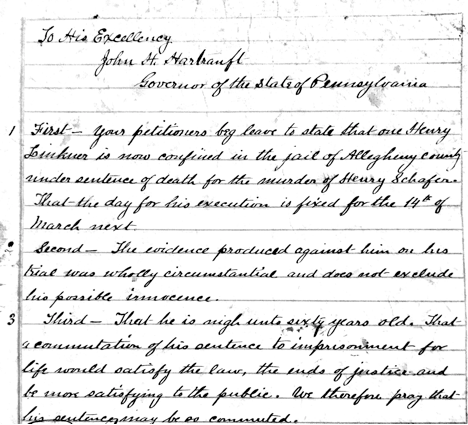 The newly created Board of Pardons, created, ironically, to limit the influence of the types of campaigns that Linkner undertook, commuted his death sentence to life imprisonment on March 13, 1877. Later reports suggested that Linkner had “plenty of money” (Pittsburgh Post-Gazette, April 12, 1884), which assisted him in gaining clemency.

In failing health, Linkner is reported to have confessed his guilt to jail authorities after having been transferred to Western Penitentiary (Pittsburgh Post-Gazette, June 7, 1878).

Henry Linkner died in prison on September 4, 1879. In his will, he left money for a library for the jail and a bell for his church.