In probably the most sensational bank robbery in Pittsburgh’s history, five Russian immigrants robbed the First National Bank in Castle Shannon on May 14, 1917.*

Though the timing and circumstances of the crime bear some resemblance to organized crime, there is no evidence this group was anything other than a one-time collection of acquaintances trying – and mostly failing – to pull off a daring robbery. Though the robbery occurred in the midst of the Russian Revolution, there is no evidence of political motivation on the part of the robbers.

Titoff, a McKeesport millworker who lived with Fedotoff, was the ringleader. Barcons and Garason lived together in the Hill District. Kemanos, who lived in Universal and was not close with the others, was recruited into the plot for his car.

In a scene right out of the movies – the Great Castle Shannon Bank Robbery – in the middle of the day of Monday, May 14, 1917, the five men, their inhibitions dulled by alcohol, drove a late model touring car from Pittsburgh to Castle Shannon. After parking a half mile away and leaving Kemanos behind the wheel, the other four men entered the bank and began firing. Two bank tellers, Daniel H.A. McLean and Frank W. Erbe, were killed when they returned fire. The robbers fled with $17,000. 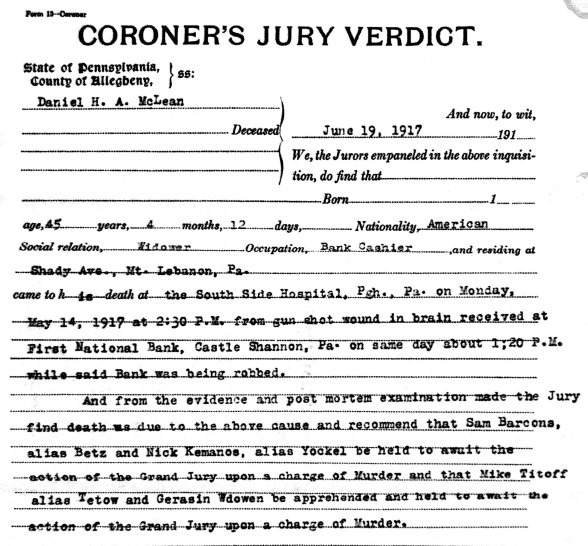 Hearing the gunshots, nearby residents armed themselves. As the robbers fled, armed citizens chased them with guns blazing in a remarkable vigilante episode. Under fire, Fedotoff, overweight and unable to stay ahead of his pursuers, committed suicide. Barcons, who had fled with Fedotoff, was cornered in the woods, at which point he attempted suicide by shooting himself in the head, but survived. Town residents beat and threatened to lynch him. Police had yet to arrive.

Titoff and Garason , who had run toward the car, fled with Kemanos. Outside of Castle Shannon, the two men got out of the car, fled on foot, and were never apprehended (without any reliable idea of their names, it is difficult to trace them).

Kemanos was captured by police on Greentree Road.

Proceeding to trial, Barcons and Kemanos asked to be tried separately. After his trial had begun in December 1917, Barcons decided to plead guilty. His plea was accepted and his crime was fixed as first-degree murder on December 12. He was sentenced to death on February 1, 1918. 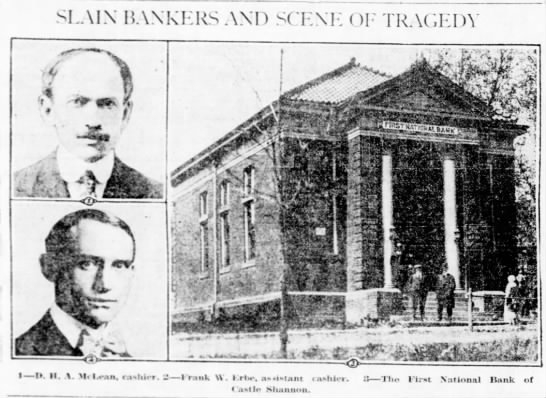 Kemanos, who claimed with some evidence that he was an unwitting and unarmed accomplice, was tried separately for each of the two murders. On December 16, 1917, he was acquitted of McLean’s murder after the jury refused to find him guilty of first-degree murder, its only available charge.

On February 7, 1918, after seven days of jury deliberations, during which the judge refused to accept an initial jury verdict of guilty with a recommendation for mercy, a clearly reluctant jury convicted him of first-degree murder for killing Erbe. He was sentenced to death on May 30, 1918.

Before the issue could be litigated, Kemanos, like Samuel Byrd and Jack Thompson soon after, died of tuberculosis in the Allegheny County Jail on November 29, 1918, during the global influenza pandemic that followed World War I. Michael Roma, who had been sentenced to death in 1912 and found insane and sent to Mayview State Hospital in 1913, died there of influenza one day before Kemanos.

His clemency request rejected, Samuel Barcons was electrocuted at Rockview on January 13, 1919.

* The definitive account of this case is provided by Roger Stuart and Edward Hale’s “The Great Castle Shannon Bank Robbery,” Pittsburgh Post-Gazette, May 18, 1997.