Madison Phillips was found dead in his 46 Arthur St., Hill District home early on the morning of October 26, 1917.

He had been killed in bed earlier that morning by a single gunshot wound to the head. The killing occurred two days before Phillips was to be married to Katie Tripp. 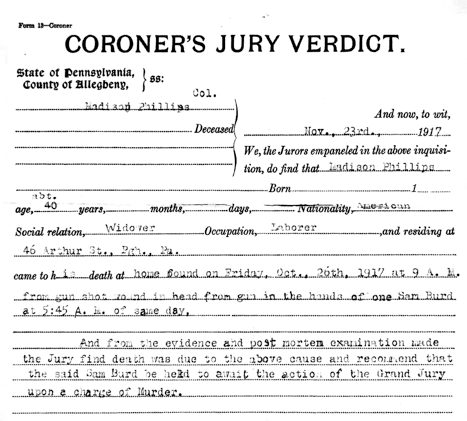 Samuel Byrd was arrested that night after police learned that Byrd and Tripp had previously been engaged and that Byrd had threatened Phillips after telling Tripp that she would marry no one other than him. Byrd confessed to police.

On appeal, Byrd’s claim that an error in jury instructions related to his self-defense claim invalidated his conviction was dismissed (Commonwealth v. Burd, 263 Pa. 143, 1919).

Byrd and Phillips, both recent arrivals from Georgia, were among the big wave of Black migrants into steel mills burgeoning by the demands of World War I and depleted of Eastern European laborers for the same reason. Often recruited by labor agents who traveled into the south, these black men faced barriers to entry and integration far greater than their European counterparts who were able to become fully white and thus “genuine Americans” within a generation.

Byrd died of tuberculosis in the Allegheny County Jail on January 9, 1919. Like Kemanos before him and Thompson after him, though the cause of each death was listed as tuberculosis, the cluster of jail deaths was almost certainly related to the influenza pandemic that hit Pittsburgh particularly hard at the end of World War I and swept the globe into 1920.