In 1859, George and Martha Grinder moved to Pittsburgh from Louisville, where they had married. The couple first lived in a meager dwelling near the Point while George, described as “slow and simpleminded,” worked as a coalminer (Pittsburgh Gazette, August 28, 1865). Martha apparently had financial ambitions far beyond those George, though from a propertied family, could provide, and the ruthlessness to pursue them.

Without any evident change in their financial circumstances, the couple soon moved to a nicer house on Gray’s Alley, across the Allegheny River in Allegheny City, where Martha quickly gained a reputation for her neighborliness.

Next door lived a younger couple, James and Mary Caroline Carothers. Soon after the Grinders moved in, Mary Caroline Carothers fell ill. Grinder tended to her as she battled bouts of worsening illness. By the time she died on August 1, 1865, the suspicions of James Carothers, who had also been ill, and others had been aroused.

Postmortem investigation found arsenic and antimony. Recognizing the trail of death – of Grinder’s first husband, other neighbors, and Jane R. Buchanan, the Grinder’s maid at their previous Pittsburgh residence – in her wake, investigators began to consider that the illnesses that Grinder had become so well known for tending she may also have been causing.

The Buchanan case, in particular, was reopened. After a brief bout of acute stomach pain, Jane Buchanan had died on February 28, 1864, only days after beginning work in the Grinder’s Hand St. (now Ninth St.) home. After Buchanan’s death, which had been ruled to be from natural causes, her friends were troubled to find that valuables were missing from her home. Buchanan’s body was subsequently exhumed and it was found that she had been poisoned.

Grinder was arrested on August 26, 1865. Her trial, which focused only on the Carothers case, and which included the testimony of James Carothers, other neighbors who had fallen ill in Grinder’s care, chemists and physicians, and a former servant who had purchased poison for Grinder, resulted in her first-degree murder conviction, on October 28, 1865.

Grinder was sentenced to death on November 25, 1865, at the same time that Frecke and Marschall were assigned the same fate. Pittsburgh had entered a notorious case into the golden age of poisoning. Another, that of Louis Lane, would soon follow.

All the while, the list of other possible victims grew to include her husband’s brothers, Samuel, a veteran of the Battle of Gettysburg who died while on medical leave at his brother’s home on December 4, 1864, and Jeremiah, who died on November 15, 1864. Their deaths reportedly increased the size of the inheritance available to George and Martha Grinder. Mrs. Marguerite Smith, another neighbor, and Mary Caroline Carothers’ sister, Mrs. J.M. Johnston, had also died under mysterious circumstances.

The total number of Grinder’s victims is a matter of considerable speculation. The sensationalistic press of the time characterized her as ruthless and boundless in her villainy, while more careful contemporary observers note the absence of adequate investigation to support many of the allegations.

Grinder, by now the “Pittsburgh poisoner” and the “Pittsburgh Borgia,” and also reported to have been an expert shoplifter, confessed to killing only Carothers and Buchanan prior to her execution.

Martha Grinder was hanged on January 19, 1866. As with so many others who went to the gallows, Grinder died slowly, fitfully, of asphyxiation (New York Times, January 21, 1866).

In the space of less than eight years, Pittsburgh had executed two women; the only two women it would ever execute.

Grinder’s crimes and her execution were quite a sensation, receiving national newspaper attention and entering Grinder into the pantheon of female serial killers that is the subject of so much attention. As was customary for sensational murder cases of the day, the trial testimony was published as a quickly-produced book.* 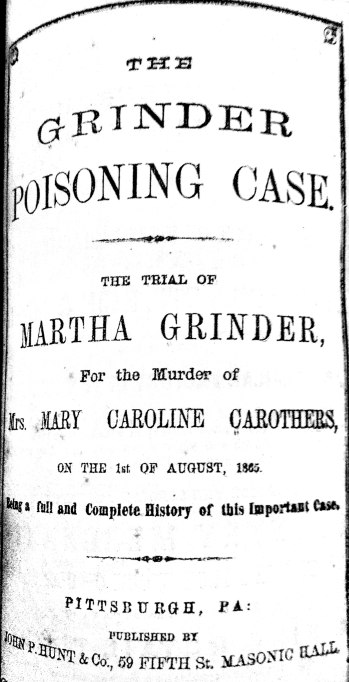 As historically aberrational as the execution of two women in such close proximity was, these two executions, and the earlier death sentence imposed on Mary Martin, fit a larger pattern in which working class and black women are placed outside of the conceptions of ideal womanhood that otherwise protect women from the death penalty (Linders and Van Gundy-Yoder 2008).

George Grinder died at his home in Parker, Pa., northeast of Pittsburgh, on February 24, 1892.

* An interesting aside relates to the case of Pamela Lee Worms. The account of her trial, confession, and execution in Pittsburgh in 1853 for killing her husband and daughter, though sometimes included among histories of female killers, is certainly fictional and is largely recognized as such. The popularity and this and other such stories at the time has been theorized as a patriarchal response against the broader roles being performed by middle-class women.

One thought on “Martha Grinder”