Among the most infamous Allegheny County murders – featuring the first woman to go to the gallows, a wrongful conviction, an unsolved murder, and buried treasure – is the darkly gothic tale of Charlotte Jones, Henry Fife, and Monroe Stewart.

Jones, 25, and Fife, 21, who were romantically tied, conspired to rob Jones’ aunt and uncle of their life savings and use the money to begin their lives together. On April 30, 1857, they did so, stabbing to death George Wilson and Elizabeth McMasters in their log cabin home near Glassport, twelve miles south of Pittsburgh, in the process. The elderly siblings lived modestly and kept their considerable savings in their home.

The assailants stabbed Wilson multiple times and beat McMasters to death with a poker. They are reported to have stolen $600 and buried the money for later retrieval along the bank of the Youghiogheny River. 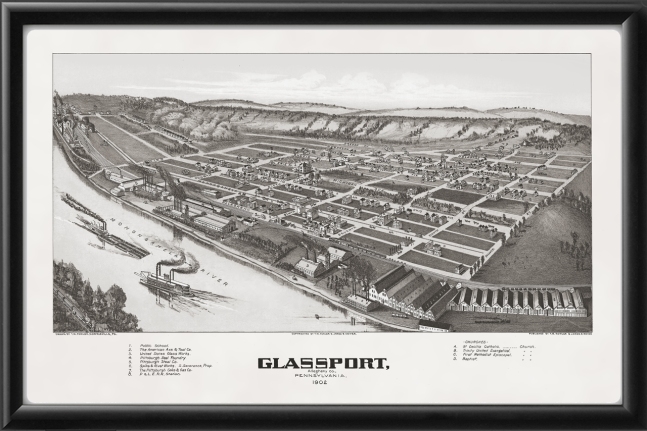 The next morning, a neighbor found the murdered siblings when she stopped by their home. Suspicion quickly fell on Jones, who had been seen in McKeesport at the same time the bodies were found and was reputed to have been involved with her brother, William, in the March 30 murder of Samuel H. White in Washington County, where she lived. White, who was reported to have had $750 in his home, had been killed under similar circumstances to Wilson and McMasters. Jones and Fife were arrested on May 1.

After her arrest, Jones first blamed her brother. Soon after, she confessed, casting herself and Fife as the unwitting accomplices of Monroe Stewart, a friend and work associate of Fife. Stewart, who had been seen with Fife shortly before the murders, did not approve of Jones. Arrested on that basis, Stewart steadfastly maintained his innocence throughout the ordeal that followed.

In the wake of a sensational and closely followed eleven day trial – the newspaper coverage was nearly stenographic – in the summer of 1857, all three were found guilty on July 11, 1857. 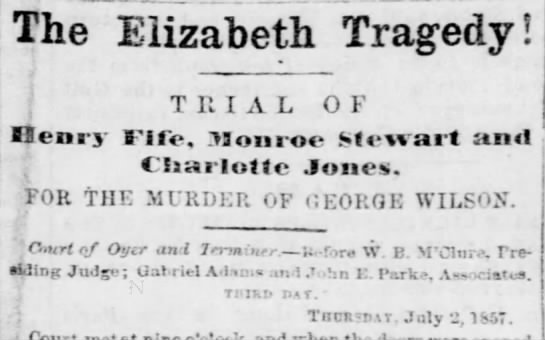 They were sentenced to death two weeks later. It was the first felony murder to result in a capital conviction in Allegheny County history. Their convictions were upheld on appeal. Fife and Jones were scheduled to hang on February 12, 1858, with Stewart scheduled to follow on February 26.

In dramatic statements from the gallows on February 12, 1858, Jones and Fife completely absolved Stewart of any involvement in the incident. Fife declared Stewart a friend who had no involvement in the crime. Jones, clearly the mastermind of the crime, acknowledged that she had originally implicated Stewart because she feared he would try to persuade Fife to leave her.

Indicative of the tempered support for the death penalty in that era, as reflected in the regular legislative attempts to abolish its use that were just beginning to wane as civil war loomed, the Pittsburgh Morning Post published a bloodless account of the executions.

Jones and Fife were hanged side-by-side; both hangings were botched, resulting in slow deaths by strangulation. Jones was the first woman, and one of only two women, to be executed in Allegheny County history. She was also the first woman to be executed in Pennsylvania since the controversial 1809 execution of Susanna Cox in Lancaster County; a case that strengthened public sentiment against the capital eligibility of infanticide (see the Allegheny County case of Mary Martin).

Contributing to the true crime murder genre that was so popular in the 19th century, the story of their crime, trial, confessions, and executions was told in a quickly-produced pamphlet.

Monroe Stewart, whose execution was scheduled for the following week, was pardoned on February 22, 1858, making his the first wrongful capital conviction in Allegheny County history. His freedom was short-lived. While in jail, Stewart had contracted smallpox. He died in Passavant Hospital on March 9, 1858. His death so soon after his pardon came to be seen by some as divine proof of his guilt and was said by others to have been faked by authorities to allow him to leave the area.

In another Gothic twist, the stolen money that Fife was said to have buried was reportedly found in 1880 by boys playing in the area, only to have it quickly stolen from them by a red-headed stranger.

The murder of Samuel H. White was never solved. Charlotte’s brother, William Jones, Jr., was convicted of the murder on November 23, 1857, but had his conviction overturned in February 1858. He was acquitted at a second trial in May 1858, but back in prison multiple thereafter for a series of violent crimes.