Michael Ruminski, a Polish-born steelworker, murdered his wife, Johanna, on the evening of January 28, 1898, in their boardinghouse room at 94 Ohio St. in Allegheny. The killing was the culmination of years of violence that had haunted their relationship.

After strangling Johanna, Ruminski set the room on fire in an effort to cover his crime. He then fled the scene and went in to Pittsburgh to stay with friends. When he returned to Allegheny the next day to try to raise enough money to leave town he was recognized and arrested. 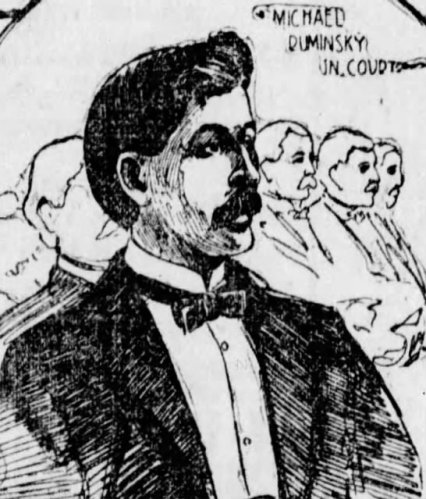 Ruminski had been arrested for the death of their son, Leo, in December 1896, and for the attempted murder of Johanna several months prior to their baby’s death. He was not charged in either case. Despite testimony that Ruminski was alone with the child at the time of death, the coroner ruled that the child died of pneumonia. The Ruminski’s were living in Braddock at the time. 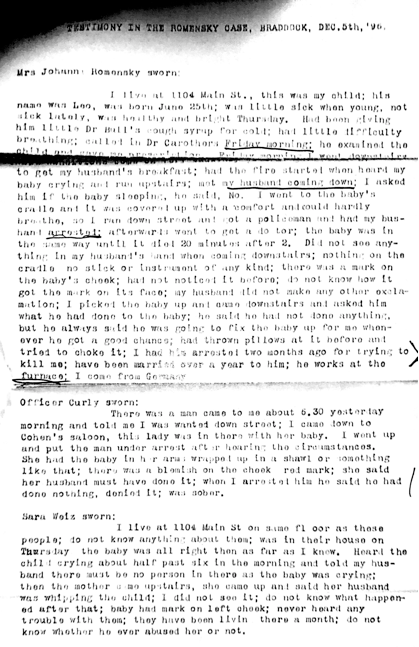 At trial for killing his wife, Ruminski gained notoriety and the nickname “the Polish dude” for his insistence on being well-dressed. In a closely watched trial, police testified that Ruminski had two prior arrests for assaulting his wife and had tried on several recent occasions to file a complaint related to his wife’s lack of attention to his care. Neighbors testified to having heard the couple quarrel the night of the murder and to Ruminski’s suspicious behavior the day after the murder. 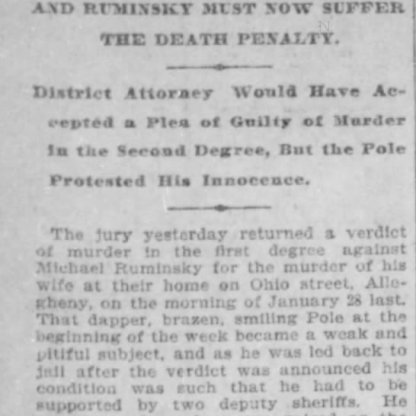 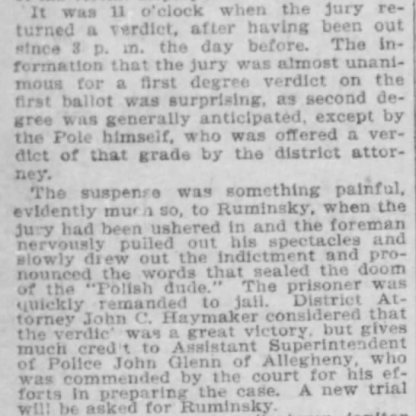 The strength of the physical evidence and testimony and the weakness of Ruminski’s alibi defense left little doubt that he would be convicted. The jury found him guilty of first-degree murder on November 4, 1898. After his motion for a new trial was rejected, he was sentenced to death on December 3.

On January 17, 1899, Michael Ruminski committed suicide by strangulation in the Allegheny County Jail. His clemency request was still before the Pardon Board.