A history of marital discord and violence ended tragically when Zenas Anderson shot and killed his wife, Pauline, on the morning of March 18, 1898. 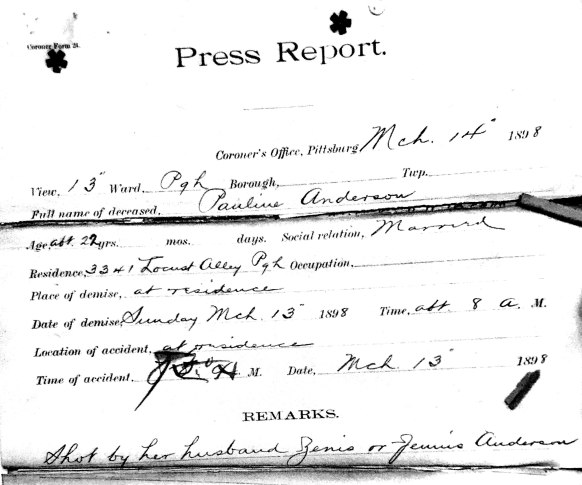 The shooting occurred in her Locust Alley, Lawrenceville home, which she shared with their three-year old daughter, Lilly, Bessie Johnston, and Rose Robinson.

At the time of the killing, Zenas had only recently been released from Western Penitentiary after serving 18 months for shooting a man from New Castle who was involved with his wife. Pauline Anderson reported her husband to the authorities after that incident, apparently leading Zenas to vow revenge. While he was imprisoned, she lived with another man.

The murder was described as one of the most premeditated and carefully planned in county history.

After the shooting, Anderson fled on foot and by trolley into the downtown and then the West End. Captured by police pursuing in a “shifting engine,” he attempted suicide by drinking poison he had obtained for that purpose. He then provided a full confession.

A straightforward domestic homicide involving a poor Black defendant, a confession, and no mitigating evidence or compelling defense, Anderson’s trial was held only six weeks after the murder and was quickly concluded. He was convicted on May 5, 1898, and sentenced to death on June 4, less than three months after the killing.

In the absence of financial means, Anderson was unable to pursue an appeal. However, the belief among the Black community, a belief strengthened by the recent hangings of the Unity defendants, that Anderson’s punishment was tied to his race – that a white defendant who had killed an unfaithful wife would have received a lesser punishment – led to a clemency request.

After having his execution respited by Governor Hastings so that his clemency request could be considered, that request was denied. Zenas Anderson was hanged on January 5, 1899.

Anderson and Pauline had married 3 or 4 years earlier in Roanoke, Virginia, where both were born. They moved to Pittsburgh to pursue work in the steel industry. Newspaper coverage framed them as attractive, bright, dashing figures, with particular attention to the “more than comely” Pauline Anderson’s light skin and straight hair as markers of her attractiveness.