The first wave of Black migration to Pittsburgh began in the late 1890s, when the tremendous expansion of steelmaking capacity and profitability made possible by technological changes and the violent suppression of labor drew Black laborers out of the Upper South. Relegated to the lowest rungs of the employment ladder, many of these men worked in numerous mining communities cropping up along the prodigious Pittsburgh seam to fuel the burgeoning steel mills.

When violent incidents occurred among them, as was inevitable under such conditions, the public and the state responded with force, threatening lynchings and demanding swift and capital punishments.

The center of these incidents was Unity, an early coalmining region east of Pittsburgh. Between the spring and fall of 1897, four recent Black migrants (in addition to Philip Hill, they were John Lamb, George Douglass, and Luther Huddle) were sentenced to death for murders that occurred in the coal fields. All but Huddle were executed. This pattern would be repeated several times over the next few decades, as each wave of Black migration brought with it a violent state counter-response.

The case of Philip Hill was the first in the “Carnival of Blood” newspapers imagined in and around Unity and that marked the introduction of a distinct racial dynamic to capital punishment in Allegheny County.

George Lawrence worked as a supervisor on the construction of the Pittsburgh, Bessemer, and Lake Erie Railway near Unity, on the Allegheny River. On April 27, 1897, Philip Hill and his two brothers, James and John, stole a boat that was being used to ferry construction workers across the Allegheny River at Hulton. When Lawrence tried to stop them, he was shot and killed. 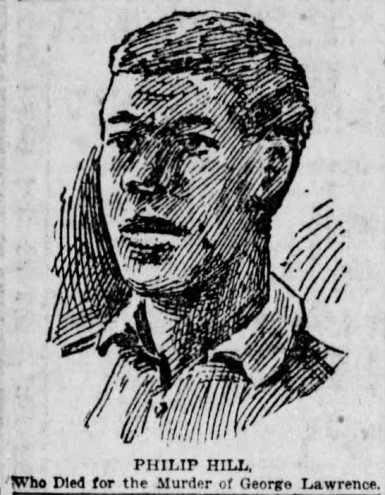 The Hill brothers fled; “a fortunate thing,” the Daily Post noted, as “the people up there are in a good humor to hang a few negroes from the new railroad.” Philip was arrested in Pittsburgh later that day. He confessed to police, and implicated his brothers. James was arrested April 30. John evaded capture.

At trial, Hill argued he acted in self-defense, though it was shown Lawrence was unarmed. He was convicted of first-degree murder on July 13, 1897, a result hailed as a “grim warning to the negroes of Unity who are bathing the new ore line in blood,” necessary as a means of “showing these bad men of the south the awfulness of the law” (Pittsburgh Daily Post, July 16, 1897). Hill was sentenced to death on July 31. James was acquitted.

A pleading pardon request filed by Hill’s mother, in which she lamented not having the money to support her son’s defense, and expressed concern that he was tried in an atmosphere of “intense public prejudice,” was unsuccessful.

However, it did persuade an attorney to develop Hill’s appeal and the governor to grant a last minute respite for that appeal to be heard. That appeal (Commonwealth v. Philip Hill, 185 Pa. 385, 1898) failed and Philip Hill was hanged on May 13, 1898.

George Lawrence had been responsible for an 1895 railway construction accident that killed one man and seriously injured another. He was arrested and subsequently acquitted in the matter.