During the early morning hours of June 6, 1917, Robert Henry Brown broke into Elford’s Wholesale Liquor, at 3703 Fifth Avenue in Oakland. When William J. Elford, the son of the owner, notified police of a burglary in progress, Pittsburgh Police officer Charles Edinger responded.

Entering the store, Edinger encountered Brown. Shots were fired by both sides, with Brown shooting Edinger and Elford before being shot and injured by Edinger’s partner, Harry Hamilton.

Edinger died later that morning in the hospital. Elford died on June 23, 1917. The injured Brown was arrested at the scene. 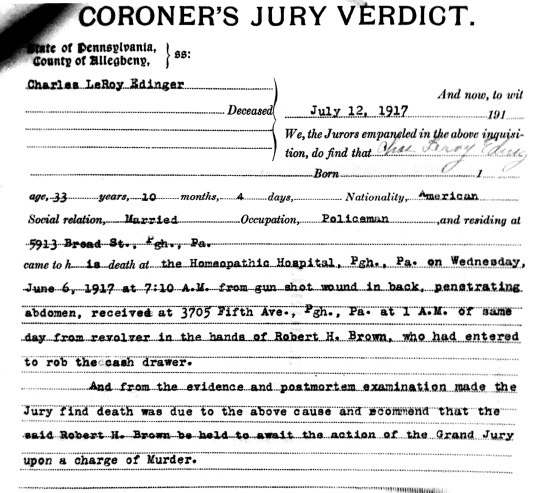 Brown, who was born in Virginia and worked as a chauffeur for department store-magnate Edgar Kaufmann, was convicted of first-degree murder in Elford’s death and second-degree murder in Edinger’s death on February 25, 1918. Police witnesses testified that Brown had confessed to the crime. The lesser conviction in Edinger’s death was due to some question as to whether Brown or Hamilton fired the fatal shot. 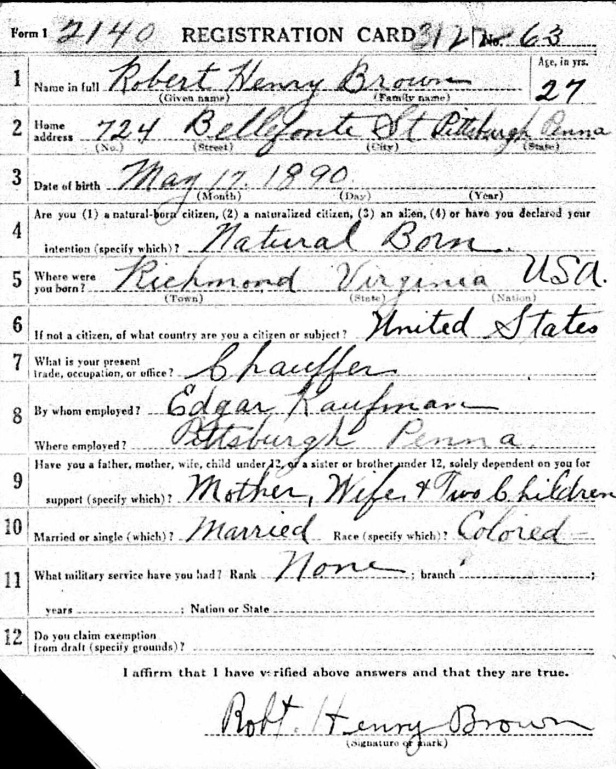 On appeal, Brown focused primarily on the prejudicial effect of testimony that he was an Army deserter. The Pennsylvania Supreme Court (Commonwealth v. Brown, 264 Pa. 85, 1919) rejected that argument and Brown’s appeal. After several respites to consider pleas to spare Brown, the Pardon Board also ultimately rejected his case.

Robert Henry Brown was executed on January 5, 1920. He is buried in the prison cemetery in Bellefonte.

Against the backdrop of the US entrance into World War I, the killing of a police officer by a Black man received remarkably little attention.

One thought on “Robert Henry Brown”