Police Officer Daniel John Conley was walking his Hill District beat in the pre-dawn hours of December 30, 1922, when he encountered a group of young men on Wylie Avenue.

As he was questioning the men, one of them drew a pistol and shot him. Found later that morning, still alive, by a fellow officer, Conley was pronounced dead soon after being transported to the hospital. His assailants had escaped. 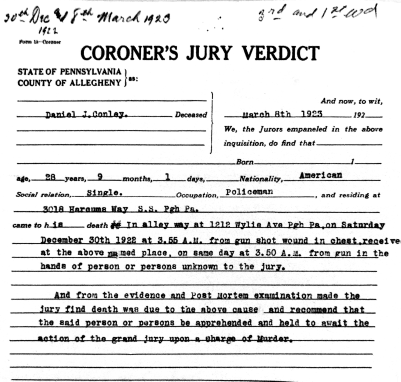 The police put out a dragnet. Dozens of Black men were arrested and a shoot to kill order was issued. All to no avail.

A lengthy investigation followed. It focused on the one available piece of evidence, a blue work jacket found near the scene.

When Henry “Pistol Pete” Jackson was arrested on Bedford Avenue after robbing a man in the Hill District on June 18, 1923, he was linked to the Conley murder by descriptions provided by a store clerk of the man who had purchased the jacket.

Under questioning by police, Jackson confessed. The Mississippi-born Jackson was found to have a lengthy criminal record in multiple states. Soon after his arrest, he was identified as a suspect in a murder in Steubenville, Ohio, sometime after Conley was killed.

At trial, two of Jackson’s accomplices, Sherman Halloway and Frank Young, testified against him. He was convicted on October 3, 1924. After his motion for a new trial was rejected, he was sentenced to death on November 7, 1924.

Lacking the money to hire counsel to advance his clemency request, Jackson took the highly unusual step of filing on his own behalf. That request was considered and rejected in January 1925.

In a little noted story, Henry Jackson was electrocuted on March 30, 1925.

A few days later, the Pittsburgh Courier published an empathic message about Jackson, a much-needed counterbalance to the common racist depictions of Black defendants.

One thought on “Henry Jackson”