With world war and immigration quotas limiting the availability of once-plentiful Southern and Eastern European immigrants and black laborers moving and being moved in by labor agents to replace them, the Great Migration into the mills and mines of Pittsburgh had begun. With it, already high levels of racial animus soared.

Against that backdrop, Mrs. Annie Mary (Krider) Kirker was killed in her home in a tranquil and affluent section of Mifflin Township on December 16, 1920. She had been robbed, beaten, and shot once in the head. Her assailant fled.

Though there were no witnesses to the crime, which occurred in a secluded home with no nearby neighbors, a black man had been seen in the neighborhood. Also, a bloody trail was left in the snow and a bloody coat was recovered. Jewelry and other items were missing from Kirker’s home.

Another theory of the case focused on Kirker’s husband, Albert. Beyond the broader truth that most domestic murders are committed by another resident of the home, Mr. Kirker acknowledged having argued with his wife the previous evening. Also, his gun, later determined to have been the caliber of weapon used in the killing, was missing and police reported there were no signs of struggle at the home.

A third theory focused on a “tramp” who had apparently been at the home and in the area. After being surveilled by police, he was dropped as a suspect.

The coroner’s jury which determined that Kirker had been murder included Pearl Biddleston, believed to be the first woman to serve as a juror in Allegheny County history. Her service had been enabled by the enactment of the Nineteenth Amendment, which had been ratified five months earlier.

Joseph Thomas was arrested in a Westinghouse work camp in Wilmerding on February 1, 1921, on unrelated robbery charges. He had been shot in the chest by police as he was being arrested. When police searched his home, items said to be missing from the Kirker home and newspapers describing the crime were reportedly found.

A week after his arrest, while in the hospital recovering from his wounds, Thomas jumped out a third story window and fled. A massive and frenzied nationwide manhunt ensued. The guard stationed at Thomas’s door was later determined to have been drunk.

There were reports that Thomas, by now caricatured as an “ape man,” was disguised as a woman and as a minister, that he was in his neighborhood, in the mountains, in Philadelphia, and on his way to Canada. He was ultimately arrested in Baltimore in July 1921, after committing another robbery.

In the midst of a highly charged racial climate, Thomas pleaded not guilty. His counsel offered no defense and Thomas did not speak on his own behalf; a defense strategy somewhere between unorthodox and incompetent. He was convicted of first-degree murder on December 1, 1921, and sentenced to death on February 8, 1922.

On appeal, Thomas argued that jury instructions related to the legal significance of his escape were prejudicial. His appeal rejected (Commonwealth v. Thomas, 275 Pa. 137, 1922) and his clemency request refused, Joseph Thomas was electrocuted on December 11, 1922. 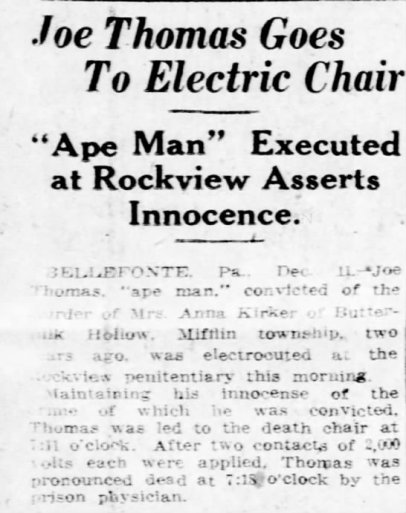 A recent and excellent reexamination of this case in the Pittsburgh Post-Gazette emphasized the prejudicial racism of that era and makes a compelling case that Thomas was innocent. In this version of the case, Kirker’s husband, Albert, committed the murder and staged the crime scene, while police, wittingly or unwittingly, abetted this effort by building a case against an easily-demonized black man.

In an article headlined with a reference to the “Ape Man,” Thomas noted just before his execution that “I am not afraid to die but I hate to go to the electric chair with the people calling me an ape man.”

The lead headline, ahead of national and international stories, April 20, 1921

The racist caricature of Thomas and the facile tale of his guilt became a staple of Pittsburgh crime journalism in much the same way as the case of Lorenzo Savage.